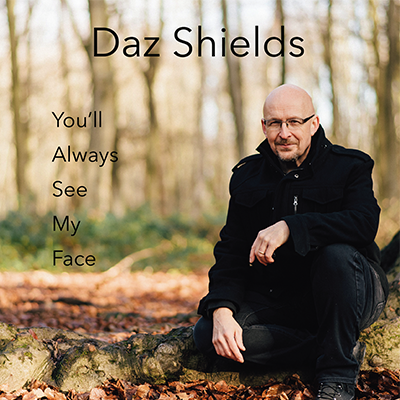 With sleek and stunning musical compositions that meld the best of Pop and Rock, Daz Shields is on the route towards success and fame, creating absolute marvels that are sure to make him a favorite.

London, UK – February 15th , 2021 – Singer and songwriter Daz Shields is on the pathway towards becoming a force to be reckoned with in the rich and multifaceted genres of Pop and Rock music as he continues to produce and create music that uplifts and inspires. Listeners of Pop music will be astounded by the sheer and absolute creativity of Daz Shields as he releases his much-awaited upcoming album titled “You’ll Always See My Face” on March 1st, 2021. An album that spans 13 tracks and is a collaborative effort between Daz Shields and other talented musicians, “You’ll Always See My Face” is set to become a roaring success.

Daz has been writing and producing music for other people for a long time now and after much introspection and contemplation he thought it was the right time for him to work on an original project that is driven by him. With the collaborative effort of his wonderful friends and colleagues, he was able to work on the stunning album titled “You’ll Always See My Face”. The album created during the lockdown is Daz at his very best producing magical combinations of the genre and is hopeful that his new musical compositions will be appreciated and celebrated by fans of Pop music.
###

Daz Shields is an up-and-coming film composer, producer, singer/songwriter and multi-instrumentalist born in Upper Norwood, South London in 1966. Daz joined his first real band at 13 years old which was called The Dumas. The band played at small local venues and included his cousin and two friends.
Fast forward to 2019, and Daz released two singles titled “All The Help I Need” and “Please Come Home To Me” while working on his forthcoming new album. The release of these singles was complemented by “Holding Off Goodbye”, another stunning song from Daz’s new album, was uploaded to his website as a music video that complemented Daz’s stunning lyricism and music composition.

In July 2020, Danz released his next track from the album which combined various rich and artistic genres and was titled quite aptly “Rock n Roll Dreams”- a nostalgic and rich track to vibe along to. In January 2021, Daz was also able to perform with the release of the title track from Bonnie Tyler’s new album titled ‘The Best Is Yet To Come’- a track on which Daz expertly plays drums and sings backing vocals. In the upcoming months, Daz is psyched and hyped to release his stunning and splendid new album titled ‘You’ll Always See My Face’ which will become available on all music platforms in March 2021.